LiteSpeed Web Server is one of the best high-performance and high-scalability webserver type. Being used on near 3% of total websites is the 4th as popularity worldwide. LiteSpeed Web Server can be used to replace an existing Apache system, without changing other applications or operating system details.

With its comprehensive range of features and easy web administration graphical console, LiteSpeed Web Server can help you deliver the best performances out of existing hosting solution. There are 3 editions of LiteSpeed:

The LiteSpeed Web Server uses similar rewrites as Apache, so the rules can be placed on .htaccess file. As default, OpenLiteSpeed Edition is not configured to parse the .htacces file so none of the lines will be processed. Before starting to use WP Hide, ensure the Rewrites are turned on:

Open the LiteSpeed WebAdmin Console, and access the Virtual Hosts: 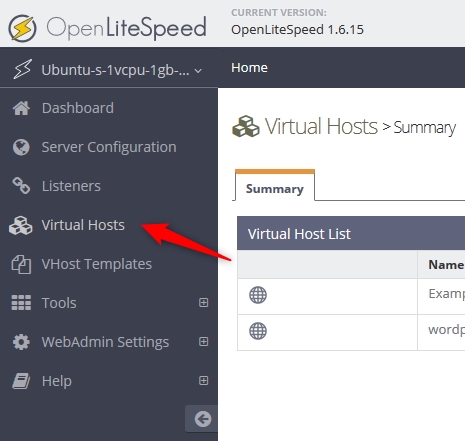 Select the Rewrite tab in the horizontal navigation

Click to edit Rewrite Control area and set the Enable Rewrite to Yes also Auto Load from .htaccess to Yes

Restart the ListeSpeed server for the options to take effect

At this point, the WP Hide plugin can be activated and configured, it will automatically generate and deploy the necessary rewrite rules to make the required features and functionality to run.

This functionality is available for PRO version.

Manual rewrite deployment.
In certain scenarios, the Auto Load from .htaccess option can’t be set to Yes, so the LiteSpeed server will not parse the .htacces file resulting in rewrite errors and assets loading issues. Through the PRO, the rewrite rules can be deployed manually within the LiteSpeed Webdmin Console.

First set the “I’ll set-up the rewrite data myself” option to Yes, within the WP Hide > Settings. This ensure the rewrites are not deployed automaticay to the .htaccess file, but allows the user to manually insert into the appropiate location on the server console:

Once the plugin configured, go to Setup interface and copy the rewrite rules, the plugin generates and outputs in the first section called ReWrite. The lines can be inserted through the LiteSpeed WebAdmin Console at Virtual Hosts > Current site Host > Rewrite > Rewrite Rules

Restart the ListeSpeed server for the options to take effect